Around the B&B you can appreciate many places of historical, artistic and culinary. 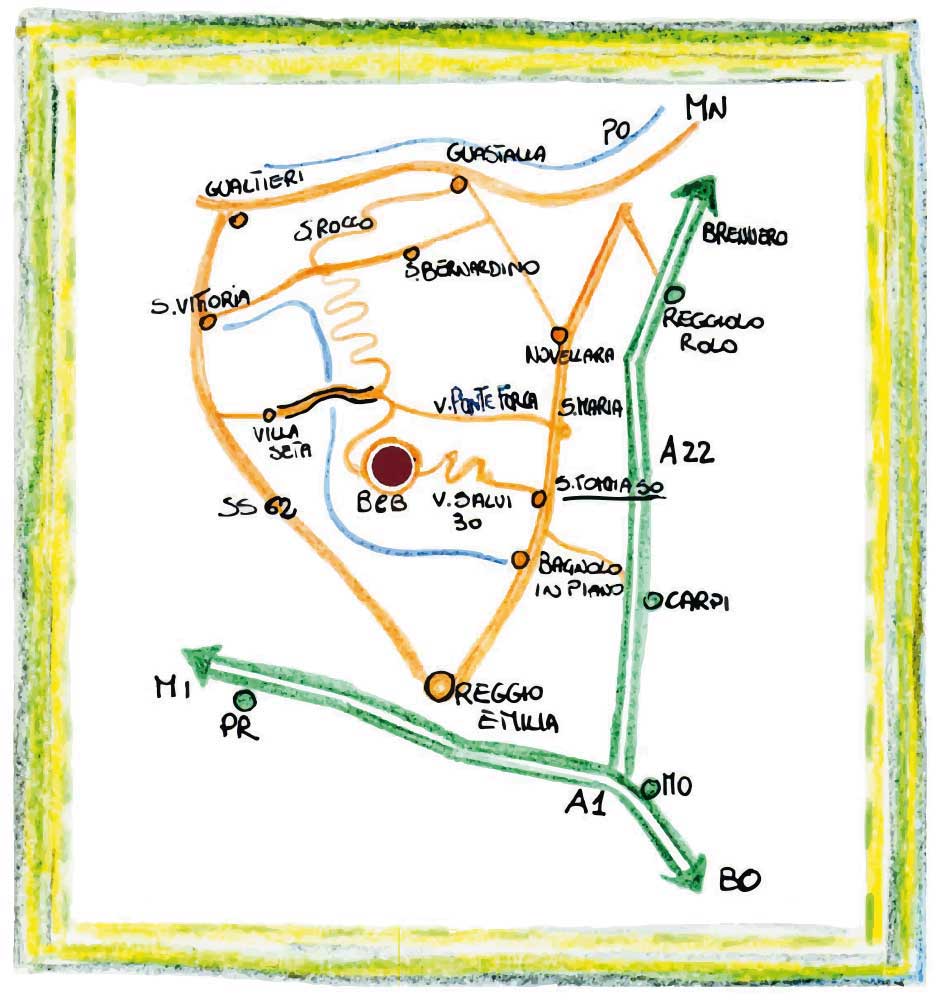 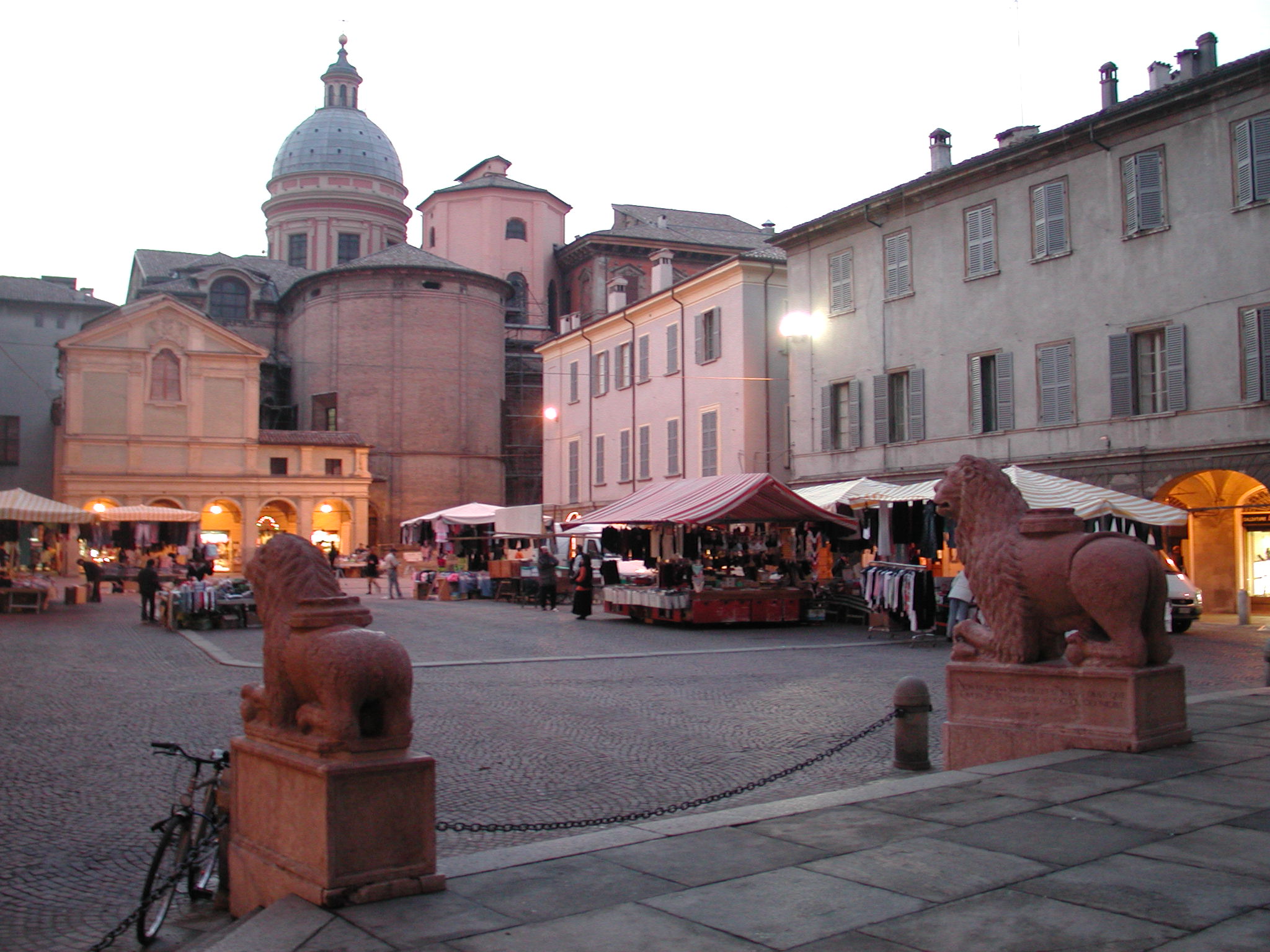 Reggio Emilia is a city in northern Italy, in the Emilia-Romagna region. It has about 170,000 inhabitants[1] and is the main comune (municipality) of the Province of Reggio Emilia.

The old town has an hexagonal form, which derives from the ancient walls, and the main buildings are from the 16th–17th centuries. The comune’s territory is totally on a plain, crossed by the Crostolo stream.

Guastalla is situated in the Po Valley, and lies on the banks of the Po River. Guastalla is located at around 30 kilometres (19 mi) from the cities of Reggio Emilia, Parma, and Mantua.

The area of Guastalla was probably settled by Etruscans as early as the 7th century BCE, but the name of the city is mentioned for the first time in 864 CE. Of Lombard origin, the city was ruled by the Torelli family from 1406 to 1539, when it became the capital of a duchy under the Gonzaga family and housed artists like Guercino and Torquato Tasso.

In 1748, by the Treaty of Aix-la-Chapelle, the city became part of the Duchy of Parma, Piacenza e Guastalla, to which it belonged until 1847, when it was inherited by the Duke of Modena. Since the unification of Italy in 1861 Guastalla has been a part of Italy. 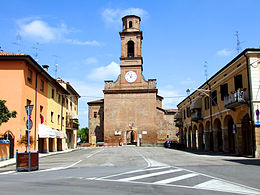 Novellara is a town and comune in the province of Reggio Emilia, Emilia-Romagna, Italy, with some 13,500 inhabitants. It is 19 kilometres (12 miles) north of Reggio Emilia and has a railway station for the local train going from Reggio to Guastalla.

The current name comes from the medieval Nubilaria, when the surrounding terrain was mostly covered by marshes, which favoured the formation of recurring fogs.

The town was the seat of the Gonzaga family from the 13th century: here Guido Gonzaga, in the early 14th century, created an effectively independent lordship, which later evolved into the County of Novellara and Bagnolo, including grossly what is now the communal territory of Novellara and the nearby Bagnolo in Piano.

After the Gonzaga’s end, in 1728, the town passed to the Este of the Duchy of Modena, whose history Novellara followed until 1859, when it was annexed to the newly unified Italy. 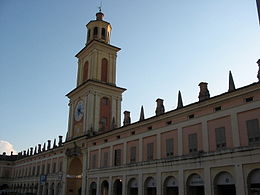 Gualtieri is a comune (municipality) in the Province of Reggio Emilia in the Italian region Emilia-Romagna, located about 70 kilometres (43 mi) northwest of Bologna and about 25 kilometres (16 mi) north of Reggio Emilia on the right bank of the Po River. Historically, it suffered numerous flood, the last occurring in 1951.

Gualtieri’s main attraction is its Renaissance quare Piazza Bentivoglio, designed by Giovanni Battista Aleotti (also responsible of the Palazzo Bentivoglio, which was the residence of the Marquisses of Gualtieri). The latter has 17th century decorations and houses a museum dedicated to the painter Antonio Ligabue. Also facing the square is the Collegiata di S. Maria della Neve, again designed by Aleotti but remade after its destruction from a flood, which houses a Crucifixion by Camillo Ricci.

Other sights include the 13th century church of Sant’Andrea and the 16th century church Chiesa della Concezione. About 6 kilometres (4 mi) outside Gualtieri, on the road to Reggio Emilia, is the 18th century Palazzo Greppi.

Correggio is a town and comune in the Province of Reggio Emilia, in the Emilia-Romagna region of Italy, in the Po valley. As of 2007 Correggio had an estimated population of 26,035

Its patron saint is Quirinus of Sisak,[2] to whom the Basilica of San Quirino is dedicated.

It was the seat of Veronica Gambara (1485–1550) a noted politician poet who ruled the principality after the death of her husband Giberto X, Count of Correggio, from 1518 to 1550.

It is the birthplace of the Renaissance painter Antonio Allegri, who was called “il Correggio” from the name of his town. The French poet Tugdual Menon resided in Correggio for much of his life. 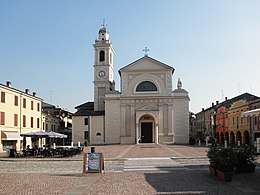 Situated in the northwestern side of the province, close to the borders with the provinces of Parma and Mantua (Mantua is in Lombardy), Brescello lies on the southern shore of the river Po, near the confluence with the Enza. The municipality borders Boretto, Gattatico, Mezzani (PR), Poviglio, Sorbolo (PR) and Viadana (MN).

Located near the Po river, remains of this ancient town’s Roman roots – it was called Brixellum or Brixillum during the Roman era – can still be seen in the Antiquarium, via Cavallotti 12 (a former Benedictine monastery), where ancient Roman relics and sculptures are on display. A bishop Cyprianus of Brixillum was present at a synod held in Milan in 451, but the bishopric came to an end when in the early 7th century the Byzantines destroyed the town to prevent it falling into the hands of the Lombard king Agilulf.[2][3] No longer a residential bishopric, Brixillum is now listed by the Catholic Church as a titular see.[4]

Today, the town is most famous for being the set for one of Italy’s most loved film series: that of Peppone and Don Camillo, played by Gino Cervi and Fernandel and based on the books by Giovannino Guareschi. Brescello has dedicated a museum to these two characters who have become symbolic of the region of Emilia after the World War.[citation needed] The museum houses many props, including a tank which was used in a scene from Don Camillo e l’onorevole Peppone (“Don Camillo’s Last Round“). The crucifix which speaks to Don Camillo in the movie is not in the museum, but in its original location, the church of Santa Maria Nascente.

Mantua (Italian: Mantova) is a city and comune in Lombardy, Italy, and capital of the province of the same name.

In 2016, Mantua will be Italian Capital of Culture, as chosen by the Italian Government on Tuesday the 27th of October 2015. In 2017, Mantua will also be European Capital of Gastronomy, included in the Eastern Lombardy District (together with the cities of Bergamo, Brescia and Cremona).

In 2007, Mantua’s centro storico (old town) and Sabbioneta were declared by UNESCO to be a World Heritage Site. Mantua’s historic power and influence under the Gonzaga family has made it one of the main artistic, cultural, and especially musical hubs of Northern Italy and the country as a whole. Mantua is noted for its significant role in the history of opera; the city is also known for its architectural treasures and artifacts, elegant palaces, and the medieval and Renaissance cityscape. It is the place where the composer Monteverdi premiered his opera L’Orfeo and where Romeo was banished in Shakespeare‘s play Romeo and Juliet. It is the nearest town to the birthplace of the Roman poet Virgil, who was commemorated by a statue at the lakeside park “Piazza Virgilio”.

Mantua is surrounded on three sides by artificial lakes, created during the 12th century, as the city’s defence system. These lakes receive water from the Mincio River, a tributary of the Po River which descends from Lake Garda. The three lakes are called Lago Superiore, Lago di Mezzo, and Lago Inferiore (“Upper”, “Middle”, and “Lower” Lakes, respectively). A fourth lake, Lake Pajolo, which once served as a defensive water ring around the city, dried up at the end of the 18th century.

The area and its environs are important not only in naturalistic terms, but also anthropologically and historically; research has highlighted a number of human settlements scattered between Barche di Solferino and Bande di Cavriana, Castellaro and Isolone del Mincio. These dated, without interruption, from Neolithic times (5th–4th millennium BC) to the Bronze Age (2nd–1st millennium BC) and the Gallic phases (2nd–1st centuries BC), and ended with Roman residential settlements, which could be traced to the 3rd century AD. 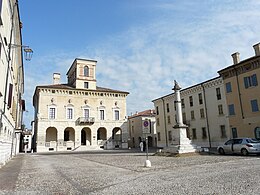 Sabbioneta is a town and comune in the province of Mantua, Lombardy region, Northern Italy. It is situated about 30 kilometres (19 mi) north of Parma, not far from the northern bank of the Po River. It was inscribed in the World Heritage List in 2008.

Sabbioneta was founded by Vespasiano I Gonzaga in the late 16th century along the ancient Roman Via Vitelliana, on a sandy bank of the Po (whence the name, meaning “Sandy” in Italian); he was its first duke, using it as a personal fortress and residence.

It was also during this period that it became a minor musical centre; composers such as Benedetto Pallavicino were employed here by Vespasiano Gonzaga, prior to his moving to the main Gonzaga city of Mantua.

In 2008, Sabbioneta was inscribed in the UNESCO World Heritage List as a recognition of its perfect example of practical application of Renaissance urban planning theories.

Sabbioneta is also known for its historic Jewish Ghetto and Synagogue, and in particular for its Hebrew printing-press. In 1551 Tobias Foa set up the press; he had, however, published certain “anti-Christian books” and his career was “forcibly ended”. His work and possibly his type were taken up by a Christian printer, Vicenzo Conte. 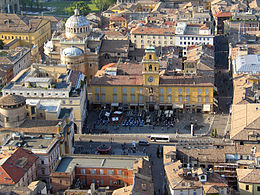 Parma is a city in the Italian region of Emilia-Romagna famous for its prosciutto (ham), cheese, architecture, music and surrounding countryside. It is home to the University of Parma, one of the oldest universities in the world. Parma is divided into two parts by the stream of the same name. The district on the far side of the river is Oltretorrente. Parma’s Etruscan name was adapted by Romans to describe the round shield called Parma.

The Italian poet Attilio Bertolucci (born in a hamlet in the countryside) wrote: “As a capital city it had to have a river. As a little capital it received a stream, which is often dry”. 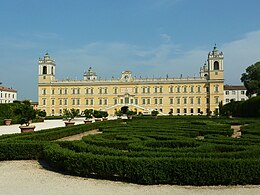 The most famous attraction of Colorno is the Ducal Palace (Reggia), built in the 18th century for the Farnese family.

Also noteworthy are the Aranciaia, erected in 1710–12 by duke Francesco Farnese as a shelter for the orange and lemon trees that in summer decorated the Ducal Palace. It was designed by Ferdinando Galli Bibiena. It is currently seat of the Museum of the Peasant Civilisation and Pre-Industrial Technology.

A typical dish from this town and area of the Province of Parma, is the Tortél Dóls, a kind of Ravioli with a bittersweet stuffing, whose origin goes back to the times of the Empress Marie-Louise of France, Duchess of Parma.

Modena is a city and comune (municipality) on the south side of the Po Valley, in the Province of Modena in the Emilia-Romagna region of Italy.

An ancient town, and seat of an archbishop, it is now known as “the capital of engines”, since the factories of the famous Italian sports car makers Ferrari, De Tomaso, Lamborghini, Pagani and Maserati are, or were, located here and all, except Lamborghini, have headquarters in the city or nearby. Lamborghini is headquartered not far away in Sant’Agata Bolognese, in the adjacent Province of Bologna. One of Ferrari’s cars, the 360 Modena, was named after the town itself. One of the colors for Ferraris is Modena yellow.

The University of Modena, founded in 1175 and expanded by Francesco II d’Este in 1686, has traditional strengths in economics, medicine and law and is the second oldest athenaeum in Italy, sixth in the whole world.[citation needed] Italian military officers are trained at the Military Academy of Modena, and partly housed in the Baroque Ducal Palace. The Biblioteca Estense houses historical volumes and 3,000 manuscripts. The Cathedral of Modena, the Torre della Ghirlandina and Piazza Grande are a UNESCO World Heritage Site since 1997.

Modena is well known in culinary circles for its production of balsamic vinegar.

Famous Modenesi include Mary of Modena, the Queen consort of England and Scotland; operatic tenor Luciano Pavarotti (1935–2007) and soprano Mirella Freni, born in Modena itself; Enzo Ferrari (1898–1988), eponymous founder of the Ferrari motor company; the Catholic Priest and Senior Exorcist of Vatican Gabriele Amorth; renowned chef Massimo Bottura and the rock singer Vasco Rossi who was born in Zocca, one of the 47 comuni in the Province of Modena.